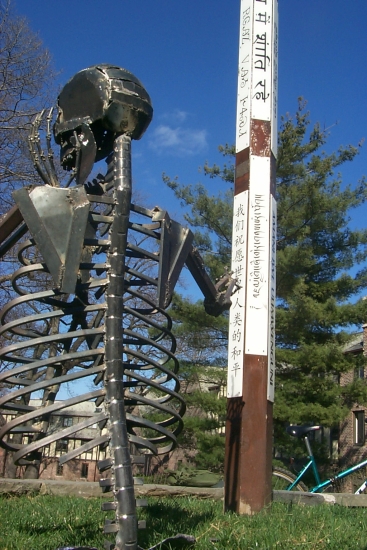 Reminder is my conference project for "Sculpture: Explorations" with Tishan Hsu. It was positioned next to the Peace Pole on the North Side of Westlands, the main administrative building at Sarah Lawrence College. I was only able to receive permission to install the sculpture for a week. I also handed out and posted a flier which can be downloaded below. The photos were taken by Keith Perhac and I.

I came up with the idea for this piece last Spring while studying in central Mexico. It is my attempt to fulfill the promises I have made.

One of the the most startling things about traveling in Guatemala was when people would tell us, "I don't hate you simply because you are from the U.S... I have learned to differentiate." This was told to us by mothers and widows of the Disappeared, ministers, priests and others. I would learn that Guatemala has been very heavily scarr ed by US foreign policy.

Anti-communism and the National Security Doctrine (DSN) formed part of the anti-Soviet strategy of the united States in Latin America. In Guatemala, these were first expressed as anti-reformist, then anti-democratic policies, culminating in criminal counterinsurgency. (1)

Chiapas was also a crazy stressful place. The human rights worker and nun who were our contacts there asked that I not wear my name tag (2), which could not only put me in danger of being deported, but might be traced back to their communities and used against them. Later I would see the military illegally photographing us. One of the groups we were able to visit were Las Abejas (the Bees), a community devoted to non-violence. We visited a tent village watched over by police with Kevlar helmets and body-armor complimenting their M16s. Installed: Shadow of left hand is pointing to Chinese glyph for Peace

In the Abejas community at Acteal, we saw a church they no longer meet in because of the 1997 December 22 massacre perpetrated by a paramilitary group (while the police in the area did nothing). We saw the bullet holes left in the thin wood walls of the church. We saw the graves of the mostly women and children from the massacre. We wept with the friends and families of the 45 victims.

These short anecdotes are the startling tip of an iceberg. I do not have time here to talk of neoliberal economics, apathy, globalism, consumerism or dying slowly. I only hope that this brief background gives some indication to how overwhelming this was for me and members in my group. I didn’t know what to do with with my newly realized position as representative of an Oppressor. My friends and I asked, "what can we do? What can we possible do to help without meddling, to right the wrongs and stop the killings?" They told us to simply tell their story—to tell everyone we could the necessity of involvement here in the U.S., to ask that our government and our corporations to quit killing in our name.